The summer physics classes are very successful. All of the student enjoyed all of their physics classes. If you want to register a class and want to watch a sample physics class that the two teachers taught before, I can send you a video.
All of this Fall’s physics classes will be taught by two instructors, Dr. Chunlai Yang and Mr. Eduard F. Both of them have very strong profile (details below). Dr. Yang will teach the class online, and Eduard will teach the classes onsite at SpringLight.
Physics Registration: https://goo.gl/w4ZpFX
Address: 1340 S. De Anza Blvd. Suite 204, San Jose, CA 95129
If you take the class online, we will email you the online class instruction after you register.
Thank you card received from the student and parent: 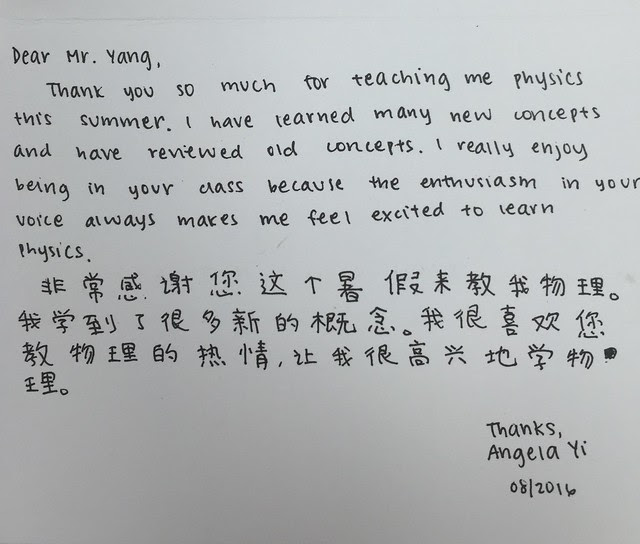 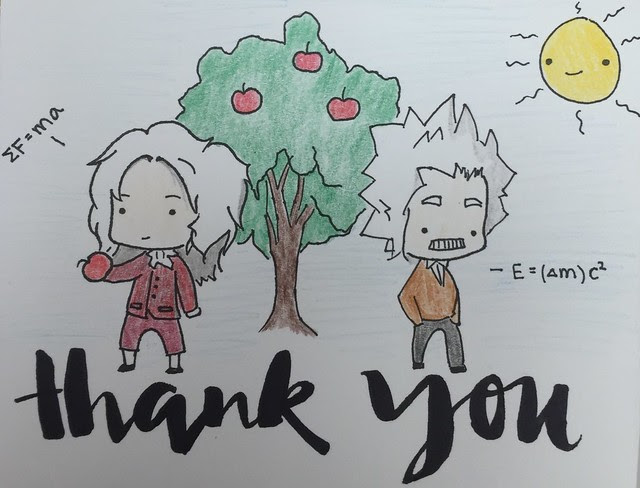 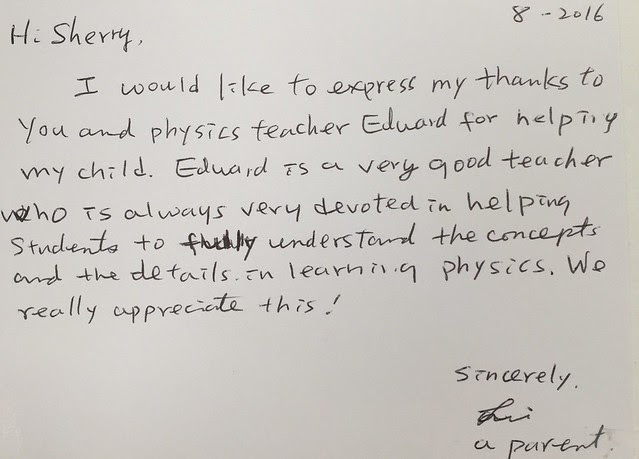 Instructor:
Dr. Chunlai Yang graduated from Peking University (B.S. and M.S. in physics) and Boston College (Ph.D. in Physics).  He has taught in the Physics departments of Peking University and Boston College.  When Dr. Yang taught physics at Peking University, he received the ”Excellent Young Teacher Award”.  While working at Boston College, Dr. Yang received the “Teaching Excellence Award”, and also co-authored the textbook: << INTRODUCTORY PHYSICS LABORATORY MANUAL >> by George Goldsmith and Chunlai Yang.  In recent years, Dr. Yang has devoted himself full time to tutoring high school students.  He teaches many kinds of math and physics competition training classes, and also instructs students in various math and physics courses.  His teaching is lucid: concepts are clearly identified and easily understood, with strong logicality. Many of Dr. Yang’s students have made distinguished performances in math and physics competitions, and have achieved excellence in their school courses, which has effectively promoted the opportunities for these students to be admitted into top universities.  His own child was accepted into the U.S. Olympiad Physics Team, was admitted to Harvard, Princeton and other top universities, has graduated from Harvard University and is now continuing at Stanford Medical School.
杨春来博士毕业于北京大学（物理学学士和硕士）和 Boston College (物理学博士), 并曾任教于北京大学物理系和Boston College 物理系。在北大物理系任教期间，曾获北京大学优秀青年教师奖。在Boston College 物理系工作期间，曾获Boston College 优秀教学奖，并与George Goldsmith 教授合写了教科书: << INTRODUCTORY PHYSICS LABORATORY MANUAL >>。
​       近年来，杨春来博士全职致力于高中学生的课外辅导工作，教授多种数学竞赛和物理竞赛培训课，并辅导多种数学和物理课程。杨春来博士的教学概念清晰，深入浅出，逻辑性强，深受学生们的喜爱。他教过的许多学生在各种竞赛中表现出色，在学校课程上成绩优秀，有效地促进了学生们进入名牌大学的机会。他自己的孩子就曾进入美国奥林匹克物理队，曾被哈佛，普林斯顿等名牌大学录取，现已从哈佛大学毕业，并继续在斯坦福大学读医学院。

Eduard F. has M.S. degree in Mathematical Physics from Physics department of the St.Petersburg State University  in Russia. When he was in high school, he participated in a number of Soviet Math and Physics Olympiads at the regional and national levels. He was a member of the Soviet and Russian National Teams in the 1980-90s at many international competitions. Most of his USAPhO students qualified as semifinalists. This year seven of his eight private and group students qualified for the semifinal competition.
Share the joy